GLEN’S FAMOUS FUDGY BROWNIES — These rich, chocolate, chewy brownies are a family favorite. If you’re looking for a brownie mix-style brownie recipe, this is it! 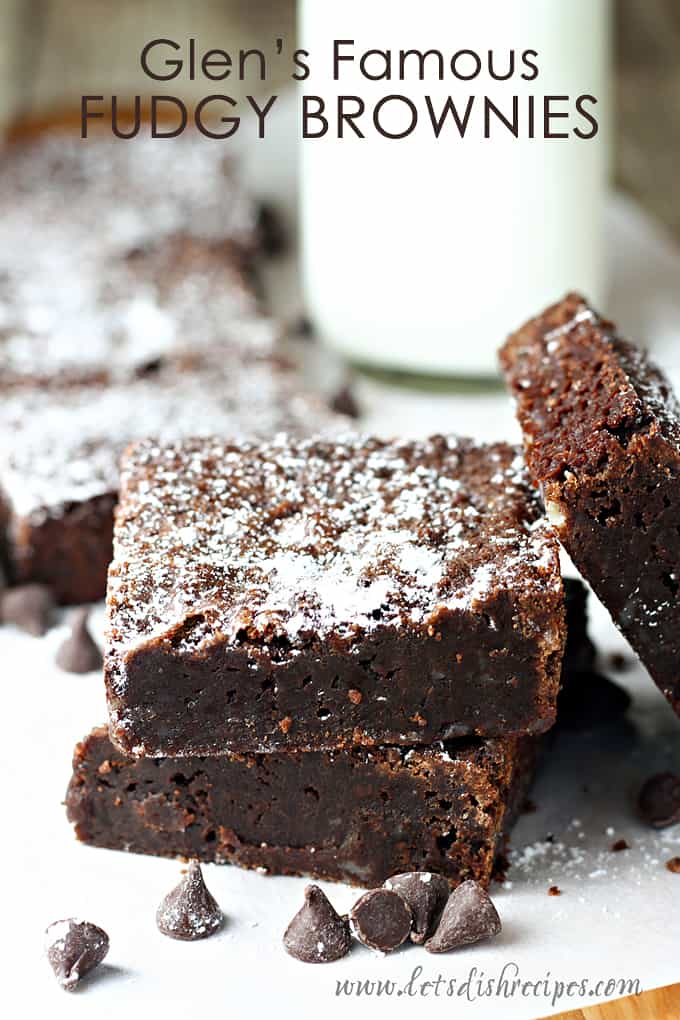 Years ago, when we were first married, my husband began a quest to find a really great brownie recipe. Needless to say, we tried a lot of brownies before we settled on the perfect recipe–Glen’s Famous Fudgy Brownies.

We definitely did not want a cake-like brownie. If that’s your brownie style, then this is not the recipe for you.

These are seriously the BEST brownies ever! Thanks for the recipe. ~ Bella

We both wanted a brownie that was chewy and gooey and dense.  Like the kind of brownie you get from a box mix. Only my husband wanted to make them from scratch.

Like I said, he tried a lot of methods and recipes before discovering this one. And no, it may not be a world-famous recipe, but it’s definitely famous in our family. This is the only homemade brownie recipe my boys have ever tried.

I made these a year ago and have been thinking about them ever since! Finally made them again for mother’s day dessert. They were a knockout! Paired warm with some homemade vanilla ice cream and you couldn’t ask for anything better! Definitely the only brownie recipe for me. ~ JC

After trying Glen’s brownies, his mom asked for the recipe, which he gladly shared, with the title “Glen’s Kick*$#!! Brownies.” We had to laugh years later when we were visiting his parents and saw that his mom had copied the recipe into her collection with the exact same title!

We kind of thought, not being one to curse, that she might change the name to “Glen’s Brownies” or something a little more tame. But nope. She left the recipe as is, title and all. 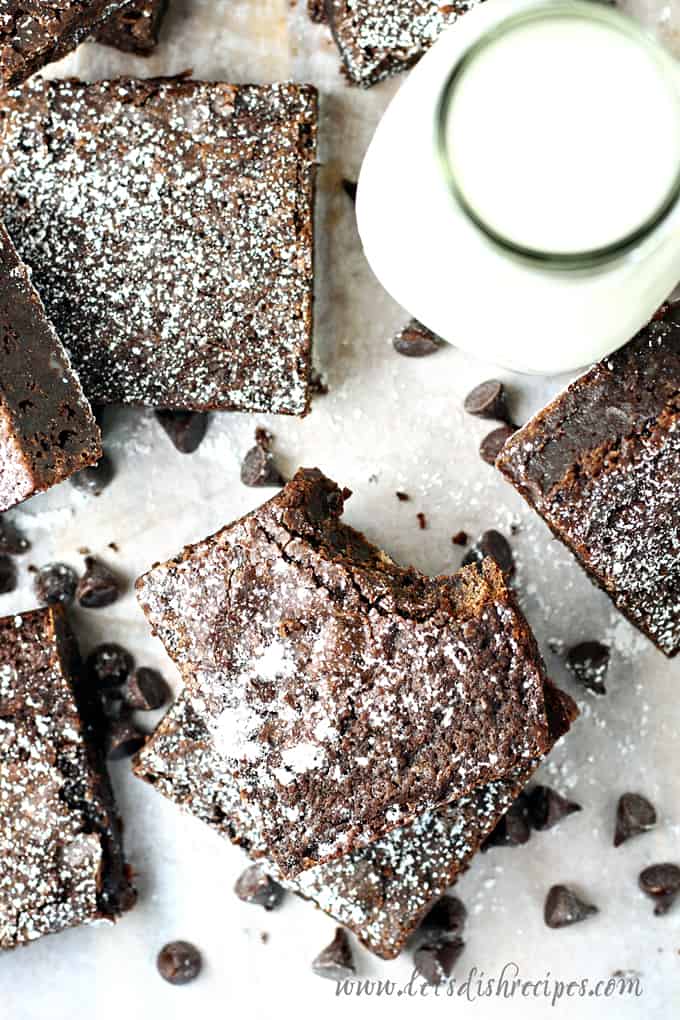 As you can see, there aren’t any fancy ingredients in these brownies. The secret is in mixing things up just the way the recipe says. It’s the melted butter that really give these brownies their gooey, fudgy texture.

My husband doesn’t like nuts, and since he always makes the brownies around here, he says they’re very optional.  Sometimes we substitute chocolate chips, which we sprinkle on top before baking.

I have never met a “from scratch” brownie recipe I liked…until now. I would not have guessed it was homemade. I don’t think I will buy another mix again. ~ Anna

If you’ve been looking for the perfect brownie recipe, you must give this one a try! Who knows, maybe it will become the stuff of legend in your family too.

Be sure to save this recipe for Glen’s Famous Fudgy Brownies to your favorite Pinterest board for later.

I tried this recipe…and after millions of brownie recipes tried (exaggerating), this is the one…unbelievably delicious. ~ Sonia 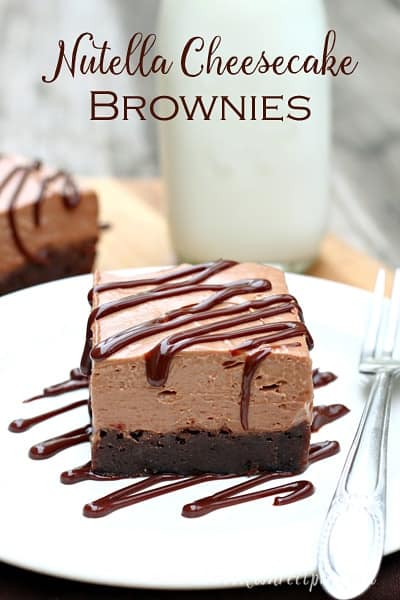 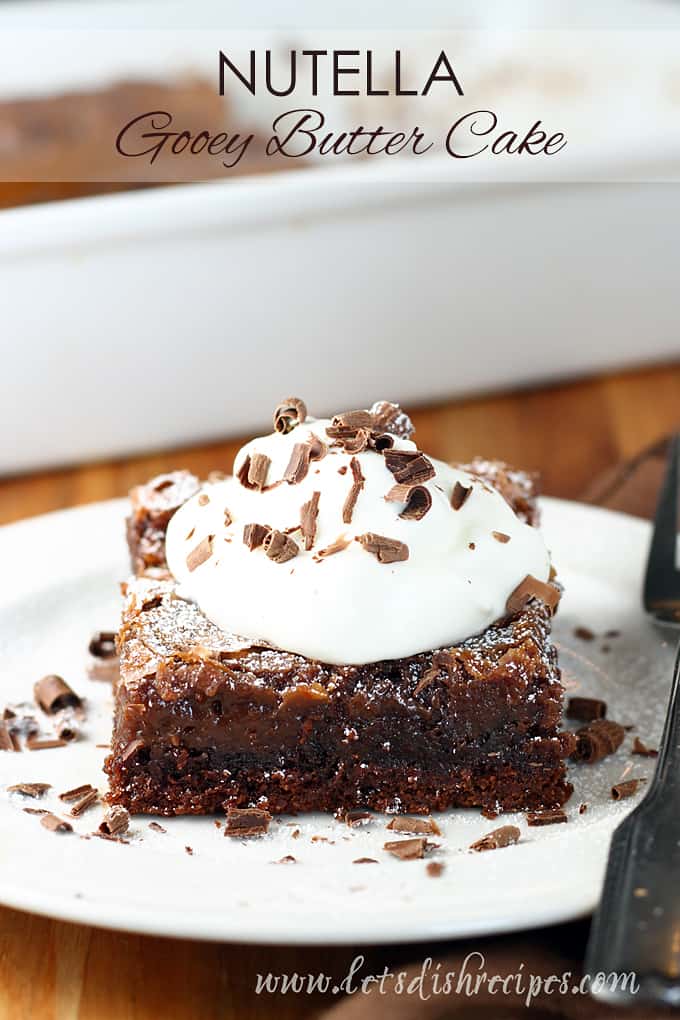 Who Dished It Up First : One day our friend Shelley brought these brownies to a church function.  When my husband learned they were made from scratch, he asked for the recipe.  That was over 20 years ago, and we’ve been making these brownies ever since.