You’ve probably noticed that I’m a big fan of hearty, creamy chowder-style soups. Honestly, I think almost any soup can be improved by adding some cream, although that’s probably not the best practice when it comes to my waistline. But that didn’t stop me from having seconds of this Roasted Poblano Chicken and Corn Chowder. 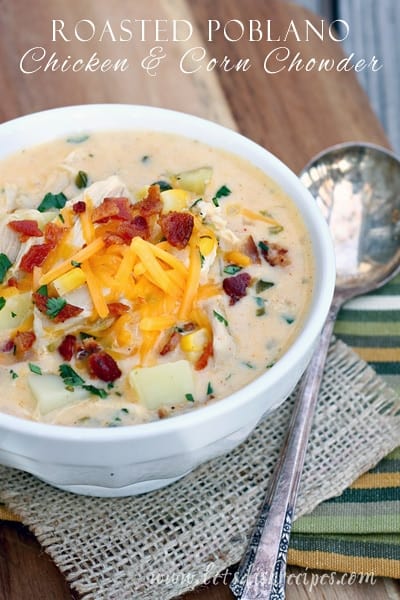 This chowder features chicken and roasted poblano peppers, along with classic chowder ingredients like potatoes and corn.

The amount of poblanos you use (as well as the number of seeds you leave in them) will directly correlate to the spiciness level of your soup, so if you don’t tolerate spicy foods, start with one pepper and remove all the seeds.

You can always roast a second poblano and add it to the soup later if it’s not spicy enough for you. My family loves spicy food, and two poblanos with a few seeds is just right for us–spicy but not overwhelming.

Black beans are also a great addition to this satisfying soup, and if you don’t have poblanos handy, us a few jalapenos instead.